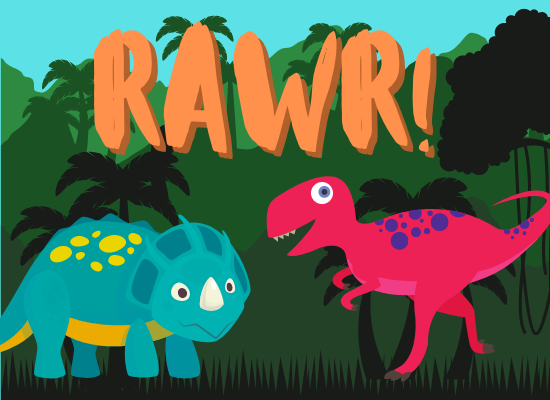 What does ‘rawr’ mean in dinosaur? ‘Rawr’ is just a cute way of saying ‘roar’ and isn’t actually a word in the English language. And as far as we know, there was no universal Dinosaur language! If rawr had a definition it would probably be something like ‘a cute and non-intimidating roar’ and an example might be a kitten trying to roar like a lion. In movies like Jurassic Park dinosaurs have been portrayed as roaring mightily, so some people use ‘rawr’ if they want their dinosaur to look adorable instead. If you are into adorable dinosaurs, I suggest you check out the Dinoverse shop!

Whether they were intimidating or not, dinosaurs almost certainly did use sound to communicate like other animals do. We have no way of knowing what those sounds actually were, since nobody has ever seen a living dinosaur! There have been many examples of fossilized skulls that suggest they had hearing, possibly even very good hearing that could pick up both low and high frequencies. They likely would have been listening for predators or prey, potential mates, as well as their young.

Dinosaurs clearly had mouths as well as other holes in their skulls that could have been used to make noise by pushing air through them. For example the Parasaurolophus has a large hollow crest and extended nasal passages. Paleontologists have theorized that they used this to make a sound similar to a foghorn. Modern reptiles also make sounds by clacking their jaws, swishing their tails, and rubbing their scales together. Dinosaurs may well have also used these methods to communicate.