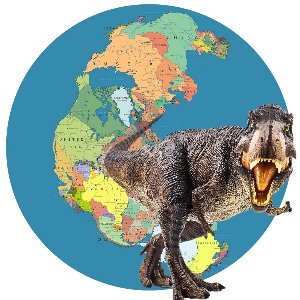 Pangaea, sometimes spelled Pangea, was a supercontinent that made up the earth that existed millions of years ago. You can often hear people refer to Pangaea as the “home of the Dinosaurs”, but it was much more than that! According to science, it has existed for more than 100 million years!

The name Pangaea, Greek for “all” (pan) and “Earth” (Gaia) came from Scientist Alfred Wegener, who introduced theories about how continents drift. The Earth is roughly 4.5 billion years old, and over this time, several different supercontinents have formed and broken up because of churning and circulation in the Earth’s mantle. The study of this movement is called “Plate Tectonics”. Scientists were studying plate tectonics way back in 1912, and since then, have learned a lot. This science of plate tectonics is just one reason we know how earthquakes and tsunamis happen.

When Pangaea was formed, what we now know as Africa joined up with South America, with North America using Florida to get between them, kind of like when the kids join the parents in bed in the morning. The other continents kind of hung out on either side of them.

Scientists believe that Pangea started splitting apart about 200 million years ago to form the continents and oceans we know and love today. This is why we can find similar dinosaur fossils in different areas, even if they are continents apart! Stegosaurus fossils have been found in North America, Western Europe, South India, South Africa, and China! They sure did like to get around! Fossils of small, land-based reptiles have also been found on different continents, and since they wouldn’t have been able to swim long distances, it further gives us proof that the continents we have now were once all joined together. 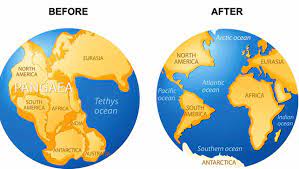 Pangaea, the famous home of the dinosaurs, probably won’t be the last of the continents to be a supercontinent. The Earth is always changing and drifting, and over millions of years, it is possible that the continents that we have now will form another supercontinent. If humans are still around when that happens, it sure will make travel a bit easier, right? With the science of plate tectonics, it is really interesting to learn about how our earth shifts and changes!